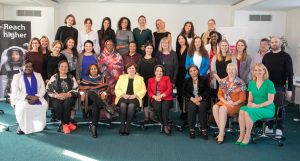 Women’s rights activists from across Africa and the Middle East were in Cambridge last week to discuss the effect that conflict and instability are having on women in their communities.

They were joined by politicians, academics, government representatives and campaigners from across Europe to discuss the women, peace and security agenda – the framework through which they seek to address the impact of conflict on women, and support women’s participation in peace processes.

The seminar was held jointly by the Karama women’s network, the UK’s Gender Action for Peace and Security (GAPS), and the Møller Institute at Churchill College, Cambridge.

The discussion opened with a session on women’s participation in mediation and negotiation, chaired by Baroness Hodgson, co-chair of the All-Party Parliamentary Group on Women, Peace and Security. Sarah Awel James, from South Sudan’s Support for Women in Governance Organization (SWIGO), discussed her experience of community-based mediation efforts between tribes that had been led by women. The discussion also looked at the shortcomings of efforts to create a more inclusive national peace process in Sudan, with a contribution from Samia El Hashmi from Mutawinat.

Peace is not just the silence of guns – it is meaningful, inclusive and sustainable (equitable) peace with capable women at the (top) table #Sudan #WATT2018 @el_karama and @Cambridge_Uni @Nowomennopeace convene in the UK. #WPS #Silencetheguns pic.twitter.com/6htjfshMHu

The delegates heard from Lord Alderdice, former speaker of the Northern Ireland Assembly, who noted that women are not a homogenous group, and cannot be treated as such. He noted that women negotiators have particular skills when it comes to peace processes, especially an ability to understand the complexity of the issues involved.

Amal Basha, who served as a member of Yemen’s National Dialogue Conference, discussed the importance that the women, peace and security agenda had played in increasing women’s Yemeni https://twitter.com/rainasow/status/1050684238738219009?ref_src=twsrc%5Etfw in the process there. The very existence UN Security Council Resolution (UNSCR) 1325, one of the keystones of the agenda, was something that women’s groups had been able to point to as a means of gaining entry into meetings and forums from which they had previously been excluded.

Implementation of UNSCR 1325 the women, peace and security agenda

The second panel focused on the implementation of the women, peace and security agenda, 18 years after UNSCR 1325 was agreed by the international community.

Laila Alodaat of WILPF said that a failure to ensure local ownership of the 1325 agenda has been a significant barrier to proper implementation, highlighting the fact that few resources on the agenda had been made available in Arabic.

Reflecting on her experience working in Iraq, Mandana Henessi of ActionAid UK said that local and sectarian politics had been a big challenge to achieving progress. She urged delegates to mobilize women and galvanise women in order to promote their agency.

Rosy Cave, who heads the gender equality unit at the UK Foreign and Commonwealth Office, discussed the UK’s National Action Plan (NAP) for the implementation of UNSCR 1325. While stating the UK government aims to keep NAPs active documents, Rosy said that she recognised the narrative around women, peace and security needs to be changed, offering that 2020 – which will be the 20th anniversary of UNSCR 1325 and 25 years since the Beijing declaration on gender equality – provides a chance to do that.

Wonderful intervention by Randa from Palestine – discussing how they not only work to develop a #NAP on #unscr1325 but went beyond to engage various stakeholders and develop accountability mechanisms to end impunity ‘ @Nowomennopeace @el_karama @mollercentre #WATT2018 pic.twitter.com/VfoNNn9rcN

Randa Siniora, of the Women’s Center for Legal Aid and Counselling (WCLAC) in Palestine, said that she and her colleagues had been sceptical of the usefulness of UNSCR 1325, but that they had engaged positively with it. She asked that the UK, as the penholder on 1325, lead the way in the creation of a UN Special Envoy to drive the implementation of the women, peace and security agenda.

Anissa Hassouna, a member of the Egyptian parliament, noted that Egypt’s last elections had a quota that ensured that at least 90 of the parliament’s 596 seats would be taken by women candidates. There will be no gender quohttps://twitter.com/Nowomennopeace/status/1050712072487673856?ref_src=twsrc%5Etfwta at the next elections in 2020. While she was optimistic about the chances of strong representation for women after the next elections, that could not be guaranteed.

The point about quotas was also explored by Mary Hanafin, who served in government in Ireland for over ten years. Noting that quotas for women and for young people were becoming increasingly common, Mary stressed the need for youth quotas to also be gender balanced.

Lily Feidy, of Palestine’s Al-Quds University, discussed her experience of practical work to increase women’s political representation, looking at how to support women into politics. Dr Alicia Cebeda of Fundación Mujeres por África and Universidad Carlos III in Madrid noted that progress had been made internationally, but it was still lacking. The women, peace and security agenda has developed, with further resolutions such as UNSCR 2242, which had seen the introduction of an expert group, but this too is lacking potency.

The seminar concluded with reflections from members of the Karama network. Faiza Mohamed of Equality Now stressed that civil society organisations need not take a lead from government, as many delegates showed, they have the initiative to drive their agendas. Reflecting a point made earlier by Laila Alodaat, activist Emna Mizouni from Tunisia spoke of the threats faced by women human rights defenders, especially online. Emna urged that action is taken now to protect women online and to ensure their digital rights to ensure they are able to become leaders.

Delegates noted that much of the discussion involved a failure by the international community to put resolutions and agreements into action. The women, peace and security agenda does not lack for words, but resource and political will continue to be stumbling blocks.

Closing the seminar, Prof. Georgia Sorenson emphasised that the power to make change lies in all our hands, it just takes the initiative, “no one is simply going to give you power, you have to take it yourself”.

Delighted to be part of this fantastic conference. https://t.co/GwElHiaLHh

So proud that our #Executive #Education team have been working with @el_karama to develop and deliver this leadership development programme #Cambridge #WATT2018 https://t.co/tIlanyMaFy