In November 2007, Karama launched the Mahfoutha Sindiyanat el-Karama Award, in appreciation of the role women across the Arab world have played as guardians of dignity and of the great sacrifices they have made in the face of discrimination, danger, and violence.

The first recipient and namesake of the award was Mahfoutha Shtayyeh from Salem village near Nablus. As Israeli soldiers and settlers uprooted hundreds of the olive trees in her village, this seemingly frail sixty-five-year-old clung tenaciously to one of the few trees left standing. In the face of the rape of her community’s lands, livelihoods, and dignity, Mahfoutha stood up to the military with courage and inspired countless others with her strength, passion, and sheer force of her will. 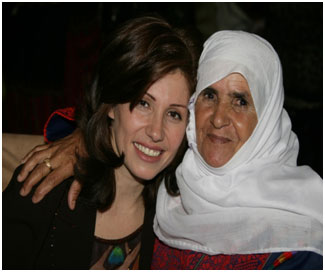 For Karama, she embodied what the sindiyanat oak represents. This large, powerful and beautiful tree provides security for the vulnerable, shelter for a multitude, food and shade for the hungry and tired. It is the symbol of strength and resilience, of struggle and endurance, of life and loyalty.

The Mahfoutha Award is shared annually with individuals who demonstrate courage, honor, selflessness, and fortitude in fighting for a better life for themselves, their families, and their communities, despite all obstacles put in their path.