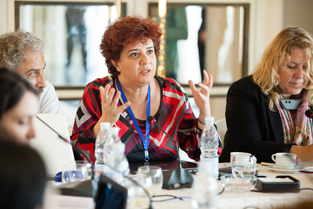 In October 2012, Karama convened a working seminar in Cairo with more than forty Syrian women from all walks of social and political life to forge a united vision and share efforts to advocate for and reinforce a greater role for Syrian women in all sectors of public affairs. Women’s role in decision-making and peacemaking and women’s security in the context of ongoing conflict and violence were emphasized as priorities within this framework.

The seminar concluded with the formal launch of the Syrian Women’s Forum for Peace (SWFP), which aims to activate Syrian and international public opinion to lobby decision makers to adopt peaceful means in political life and to build a democratic state. The SWFP also aims to create a culture of peace for all Syrians, especially since peace is one of the fundamental characteristics of Syrian culture. In addition to empowering local Syrian communities to take active roles in the peaceful political process, the SWFP will emphasize civil peace in cooperation with and collaboration with Syrian and international groups who are committed to a peaceful and democratic political process.