Agreement Is a Step Forward for Sudan – It Must Be Inclusive 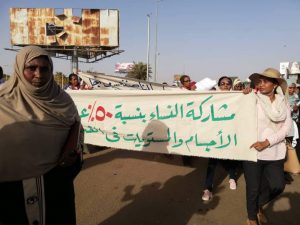 The Karama movement cautiously welcomes the agreement between the Sudanese Forces of Freedom & Change and the Transitional Military Council as a step toward full and inclusive civilian leadership in Sudan.

From the very beginning of the uprising, the millions who have taken to the streets have made clear that the people of Sudan should determine their future. Inclusive civilian administration must be the goal of this process. As such, this agreement is an important step.

However, we cannot forget the atrocities that have repeatedly been committed against the protestors by state forces. The massacre of 3 June in particular casts a long shadow on this process. The continued involvement of the military in the transition can then only be greeted with skepticism and must be analyzed closely. The path to inclusive civilian leadership is also one to peace and to justice for those murdered, raped, tortured and injured by security forces. The investigation into these atrocities must be independent and have the cooperation of all parties.

The regional and wider international community has a vital role to play in overseeing the transition and ensuring its success. We recognize the African Union’s mediation efforts in securing this agreement. There must be greater international support to ensure a peaceful transition, and no further human rights violations.

We await the full text of the agreement, but the women of Sudan have a right to expect that their full participation is guaranteed from the start. Women have been at the heart of this incredible movement, leading from the front. The Sudanese Women’s Declaration For Change No (1) April 2019 demanded full parity in all “governmental institutions, executive bodies, legislative and the judiciary including at decision making” – that must be case for the sovereign council.

Our Sudanese colleagues have long worked for a just, peaceful, and inclusive Sudan. We stand with them and the people of Sudan as they build their nation.