Sudanese Women Are Right to Demand Parity in the Transition 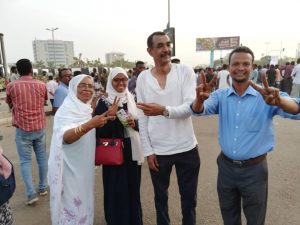 Sudan’s transition must be inclusive if it is to build a country for all Sudanese.

The Karama network endorses the Sudanese Women’s Declaration For Change No (1) April 2019, and its calls for gender parity as a minimum for Sudan’s governmental institutions, executive bodies, legislative and the judiciary, including at decision-making level.

The uprising in Sudan has been marked by the overwhelming number of women taking part in the protests. Reports estimate that as many as 70 percent of the protestors are women.

This has been a movement led by women. Sudanese women have paved the way for a transition to a new Sudan. That must be a civilian-led transition, in which women take part in decision making as equals. It must be a transition that ensures all of Sudan is represented – ethnically, religiously, culturally, geographically, ability.

The Sudanese Women’s Declaration For Change No (1) April 2019 demonstrates the serious intent of Sudanese women to participate fully in Sudan. Sudanese women have a right to expect gender parity in their institutions, but ensuring their inclusivity benefits all the people of Sudan. Making sure that these institutions are truly representative of the people of Sudan strengthens their legitimacy and credibility.

A transition that excludes the energy, wisdom, and political engagement of Sudanese women will not succeed in building a state for all Sudanese. We know from previous experience that transitions that marginalise or exclude women will not stop there – they will only serve the interests of a minority. That would be the beginning of the end of the values of the revolution. That is why parity in the transition is essential.

Recognizing the strife of the Sudanese women throughout the different successive periods Sudan has gone through and commending/noting their tremendous and systematic efforts to building a country that lays the foundation for peace, and grounded in values and principles of freedom, democracy, justice and respect for diversity,

Recalling the significant sacrifices which the Sudanese women have made, materialized in souls, blood, sons, daughters, companions and all that is precious, for the purpose of attaining dignity, democracy and decent lives for all,

Affirming the determination of the Sudanese women in their different age groups , political affiliations, social status, geographical representation and professional backgrounds, in pursuing their struggle and joint work, side by side with the “ Forces of the Declaration of Freedom and Change”, at this historical and critical point of time Sudan is undergoing and which requires the unification of efforts and voice in order to successfully achieve the desired change at political, social and economic level in accordance with the Declaration of Freedom and Change,

Recalling the human rights of women as enshrined in International, Regional and local human rights frameworks, while emphasizing women’s human right to political participation and representation in public life at all levels,

Noting that the coming period requires inclusivity of participation and representation at political, economic and social levels, across gender, age, ethnicity, disability and geographical representation,

Driven by our belief that the time has come for the “ Forces of Change and Freedom” and other active forces in this revolution to bring upfront the well-deserved and long overdue recognition of women’s contributions and role to building Sudan, and bring about tangible change in the context of the human rights of women as enshrined in International and Regional frameworks to end all forms of discrimination against women, and end the historical and current existing patterns of domination and subordination of women in Sudan which has characterized the previous eras specifically the era of “AL Einkaz” (the government of Omar Hassan Ahmed Albashir), where women were considered as the enemy and their dignity, freedoms, basic human rights were systematically violated,

We, the women of Sudan, declare that we uphold our determination and assemble our word to confirm our duty and right to bring about change, confirming the significant role we played in different forms of political resistance against the “ Inkaz “ regime in the different stages of the struggle; before, due course of the December 2018 revolution including in protests, the sit-in and in all the efforts that led to the escalation of events, which all have paved the way for an environment conducive for the change desired in Sudan,

Recognizing the urgent need at this point of time to the application of the human right of women to political participation and representation in public life,

We, the women of Sudan, declare our solid unity in claiming our right to the enjoyment of our human right to political participation including through the temporary special measures, which for us can neither be negotiated nor compromised. We, thereof, demand the following:

As, we, the women of Sudan claim our human right to political participation in public life, we believe that at this point of time, implementation of the temporary special measure as stated above constitutes one of the important and urgent strategies among others that could amplify women’s concerns, voices, gender equality agenda and perspectives on substantive issues related to building the state in its legal, political, economic and social aspects, to achieve respect for women’s human rights, gender equality and the Sustainable Development Goals.

We, therein, strongly confirm that our claim for the women’s human right to political participation and representation as previously stated is not subject to negotiation nor compromise.

May Sudan live free and independent; may our people stand strong and steady presenting a solid and inspiring example to the Nations around the world and may the Sudanese women continue to constitute the heart and backbone of the revolution.