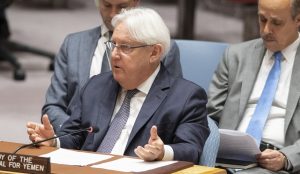 The announcement of consultations to end the way in Yemen have been welcomed by women’s rights activists. The UN’s special envoy for Yemen, Martin Griffiths, told the Security Council last week that he had invited the parties involved to Geneva on September 6th for “a first round of consultations…to discuss the framework for negotiations, to agree on relevant confidence-building measures and specific plans for moving the process forward.”

The war in Yemen has raged for over three years, witnessing tens of thousands of casualties, a humanitarian catastrophe affecting tens of millions, and gross human rights violations. It has been a conflict that has had a disproportionate impact on women, as documented in the Sisters Arab Forum for Human Rights film Hearts of Glass.

Women must be at the table

Activists have previously underlined that only a political solution to the war in Yemen will bring lasting peace. To have the best chance of success, the negotiations will have to be inclusive and representative of the country. That must involve women playing a meaningful role in the process.

Welcoming the special envoy’s announcement, Amal Basha, Yemeni activist and head of  SAF, said of the talks that:

“It gives a glimpse of hope for millions of Yemenis who have been suffering from siege, hunger, starvation, fear and displacement for more than 40 months”.