Women in Lebanon Protest as Equals 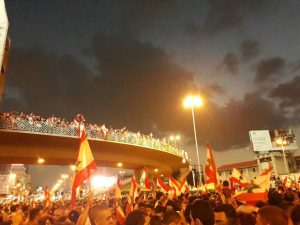 The huge protests that have brought Lebanon to a halt are marked by the sight of women protesting side-by-side with men. Lebanese women are showing extraordinary courage to demand an end to corruption and impunity, and for all Lebanese to enjoy equality – regardless of their religion, sect or politics.

The women who have taken to the streets have done so in the face of discrimination and disgraceful objectification, seizing their agency and their freedom of expression.

Their demands include an end to division, and the sectarian laws in Lebanon that prevent citizens – and especially women and girls – from enjoying equal rights under the law. Lebanon has 15 separate personal status laws, meaning that there is huge variation in women’s rights in marriage, divorce, child custody and related law. There must be serious and lasting legal reform in Lebanon that protects women and girls from violence, and enshrines their rights.

Women in Lebanon have shown their determination to achieve change, witness the campaigns to end Article 522 and the recent adoption on a National Action Plan to implement UNSCR 1325. These are tangible successes that point toward Lebanese women participating constructively in the democratic process. The presence of women, young women, and even girls on the streets demanding an end to corruption and injustice consolidate the determination of women to participate the decisions that affect them.

It was remarkable indeed to see women and girls protesting by blocking roads this week – and it is to be commended that the Minister of Interior Affairs did not order the roads to be reopened by force. It is in itself noteworthy that it was a woman politician in office to make such a decision.

As in so many protests movements, women in Lebanon have finally found equality once they take to the streets. They have expressed their desire to participate fully in decision making, national dialogue, transition and the political process.

The demonstrations show a national will for a better future, it is the duty now of politicians to listen to the people of Lebanon.