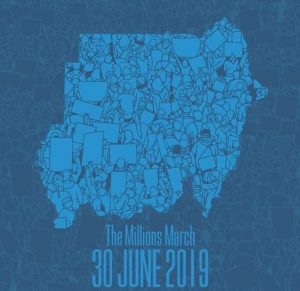 The Karama women’s movement stands with our Sudanese colleagues and the protestors of Sudan. As the people of Sudan again take to the streets right across the country, the eyes of the international community must be on Sudan to ensure that there is no repeat of state violence wielded against the peaceful protests. We #StandWithSudan, and the world must too.

The people of Sudan have made their desire for a peaceful, civilian-led transition to democracy clear from the very start of the Sudan Uprising. It is a cause that has brought millions on to the streets, and it is one that deserves the support of international community. The urgent need for civilian government in Sudan has only been made stronger by the violent response of the military regime.

The protestors have shown incredible courage and resilience, especially since the massacre of 3rd June 2019, perpetrated by state forces against the sit in. Militias unleashed appalling violence against the protestors – beatings, rapes, and murders, with the bodies of victims tossed into the Nile.

The crackdown on the protestors earlier this month was a massacre. It is imperative that the crimes carried out by state forces are subject to an independent, international investigation. The Transitional Military Council has established its own national investigatory committee, but there is no reason to believe the committee’s work will be as thorough, impartial, and trustworthy as demanded by the enormity of the crimes committed on 3rd June.

The international community – the UN, African Union, the Troika of Norway, the United Kingdom and United States, the European Union – must ensure a proper investigation into the massacre and justice for the people of Sudan.

The activists of the Karama movement from right across the Arab region #StandWithSudan and the Sudanese people in their march for a better Sudan. The international community must stand with the people of Sudan too.