#PalestinianWomen: The Disproportionate Impact of The Israeli Occupation 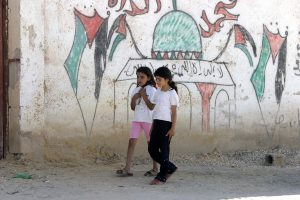 The shocking human cost that occupation has taken on Palestinian women is laid bare in research published today. Combining research, extensive surveys, and first-hand testimonies from over 40 Palestinian women, Palestinian Women: The Disproportionate Impact of The Israeli Occupation provides new insight into the gendered experience of occupation, looking into four issues in particular:

Co-authored by four Palestinian NGOs – the Palestinian Initiative for the Promotion of Global Dialogue and Democracy (MIFTAH), Palestinian Working Woman Society for Development (PWWSD), the Women’s Centre for Legal Aid and Counselling (WCLAC), and Women Media and Development (TAM), the report includes detailed findings that demonstrate how the oppression occupation has permeated women’s daily lives, and the particular impact is has had on women in Palestinian refugee camps, Palestinian women living in Jerusalem, women prisoners, and residents of Gaza who require health services.

The impact on refugee women

Researchers spoke to 500 Palestinian refugee women from 12 Palestinian camps (7 in the West Bank, 5 in Gaza). Their findings included the following:

According to official figures, 14,595 Palestinians from East Jerusalem had their residency status revoked between 1967 and the end of 2016.

Through residency revocations, Israel has separated husbands from wives, parents from children, and extended families from one another, causing traumatic complications for women attempting to remain with their families in both Jerusalem and the West Bank.

This leads to traumatic fears of separation from children for mothers and an entrenching of patriarchal practices across society. Palestinian women living in Jerusalem lose residency rights if they get divorced or their husbands remarry. Limiting their access to justice, female victims of domestic violence fear reporting abuse to authorities in case they are forcibly transferred away from their children.

Since the beginning of the Israeli Occupation of Palestine in 1967, approximately 10,000 Palestinian women have been arrested and detained by Israeli military forces. According to the Commission of Detainees and Ex-Detainees Affairs’ 2017 annual report, 1,467 children were arrested last year.

Our researchers spoke to prisoners who experienced physical and psychological torture at arrest and imprisonment, and traumatic, gendered treatment, including:

Israel exercises strict control Gaza’s borders, a policy of ‘actual authority’, constituting continued occupation, despite the withdrawal of its permanent presence. This control in particular affects those who need medical treatment outside of Gaza’s struggling health system, who require permission to leave. The report shows that the rate of approval applications is falling year-by-year:

At the end of November 2017, the approval rate was only 54% – the lowest since 2006 when WHO began monitoring patient access from Gaza.

Of the 26,282 permit applications submitted by patients aiming to exit through Erez in 2016, 8,242 (31.4%) were delayed. Many applicants received no response from border authorities, even after lawyers filed formal applications on their behalf. These delays regularly extend months and years beyond medical appointments, worsening already life-threatening diseases and in some cases resulting in death.

Read the full report here, or download it here:

Palestinian Women – The Disproportionate Impact of the Israeli Occupation