Our Solidarity With The People of Sudan 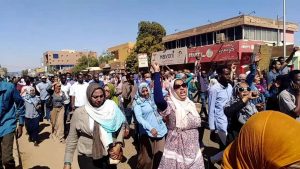 The Karama movement expresses its solidarity with the people of Sudan, and condemns the violence perpetrated against peaceful protestors exercising their rights enshrined in Sudan’s 2005 Interim Constitution.

The scenes of bloody chaos on the streets – and even in hospital emergency rooms, as well as credible reports of detention, torture and injuries from live ammunition on protestors, activists, and journalists heap further injustice on an already volatile situation, and risks inflaming matters further.

The results of the region’s recent revolutions cast a long shadow over events in Sudan. In this context the threats made by government spokespeople to raise militias are unconscionably irresponsible. Sudan is more than twice the size of Syria, more than six times the size of Libya; it must not follow them down a path to tragedy.

Nor is it necessary for the ruling regime to push the country further into bloodshed. The Sudanese people have twice before removed military dictatorships through peaceful popular uprisings, which led to orderly transfer of power to multi-party democracies in October 1964 and April 1985.

We call on the international community, particularly the African Union High-Level Implementation Panel (AUHIP) and its supporting countries in the Troika, to restrain the regime from inflicting further violence and human rights violations on its own citizens. International interlocutors have an obligation to assist the people of Sudan, ensure that the needs of its people are addressed, and pave the way to a democratic, inclusive, peaceful and just resolution to the current situation.

The power of the Sudanese people has proved decisive before in the country. The protestors are demanding their basic rights, and for their basic needs to be met. They deserve respect and a peaceful resolution.