Libya: from 17th february 2011 until 2017 – No regrets for toppling Ghadafi regime and diverse ideas for the future

Gadhafi was toppled 6 years ago. When recalling that period I feel the smell of multiple cigarettes being inhaled at lightning speed and (prepaid) Nokia phones ringing constantly. Women and girls were  constantly searching for Gaddafi-tanks who were being moved and hidden, printing leaflets and organising demonstrations. By the same token most women became DIY search and rescue teams  “Have you seen Khadisha? She left for Misrata but we didn’t hear of her since?” “Damn, where is Fatiha, she was supposed to call in before 7 PM”.  I was strolling through liberated Tripoli a few months afterwards: the streets filled with celebrating people and pick-up trucks with machine guns. However: the atmosphere at that time wasn’t aggressive but joyful. The walls were covered with posters from new political movements, concerts and the announcement of newly established radio stations.

I stayed in touch with a lot of people that helped topple Gaddafi. After 6 years I am asking several of them:

Zahra, your entire family was deeply involved in the opposition against the regime. Just as countless other Libyans you have suffered many losses after the revolution, including the assassination of your friend and LWPP co-founder Salwa Bugaighis. Libya is now in a turnmoil, was the revolution worth it?

Of course it’s was worth it. It is always worth getting rid of despotism and dictatorship. Yes, the price is high. Of course there have been many mistakes, there is a lot of criticism and doubts about the many things that went wrong. The debate and self-criticism is healthy. Please understand: the current situation is not the end state. What happened since 2011 is a movement of social empowerment that cannot be reversed. The revolution is still taking place, it is still unfinished . It will be finished someday in the future.

What should happen now? A political solution?

Dear Hala, you live in Libya and you were part of the movement that helped topple Gaddafi 6 years ago. What do you think of the current Libya? Was it worth it?  Although many may disagree but I definitely think it was worth it. before the revolution Libyans had the fate of Sisyphus, we were doomed to live in absurdity. But the revolution gave us the chance to rebel against that fate, the chance to make change happens. So despite the fact that we live in a difficult times with the political division, insecurity and the economic crises but still we have the freedoms of speech, cultural movement, the raise of civil society and most importantly the hope of correcting all the wrongs and build the nation we dreamed of.

How do you see the near future of Libya?

In five years Libyans will realise that war is not the answer and will work to achieve the reconciliation and national healing, and start the effective development process in the country.

What should be done in your view?

Its time we all admit that the political agreement has failed, and start to make realistic solutions to end the political division and security issues in Libya.

Younes Nagem is an engineer living in Libya, he is the Chair of Bokra Foundation and Project Manager of LWPP.

You were part of the movement that helped topple Gaddafi 6 years ago, what do you think of the current Libya? Was it worth it?As one the people who was there participating in the toppling of Gaddafi regime, I wasn’t really have that long term vision of what going to happen when you success in the revolution. The real answer became clear to me and some other people after a year or less, where we were clearly seeing that the real is about to start and it’s about building a nation & country not just removing a bad regime. What’s happening right now in Libya is something expectable when the authorities and the role of rule are not effective yet. It’s something worth to fight for, It takes a lot of time and sacrifices to have the country that we dream about.

What do you think of the current situation?

The near future of Libya is not predictable, but we can see that it needs a lot of work from our side as Libyans, and the process must includes a lot of missing elements and factors (such a / fighting corruption and nepotism, human rights and peacebuilding, and openness with others experiences).

What should be done in your view?

What should be done in my small experience and the base that i’m connected to it through the works that I’m doing on the ground. It can be summed up in three major titles: ending the impunity and empower the rule of law ASAP, starting a nation building process on clear national constants, and get rid of violence and extremism by soft intervention ways not just the hard ones.

What do you think of the current Libya? Was it worth it?  John F. Kennedy once said, “Those who make peaceful revolution impossible will make violent revolution inevitable.” I truly believe that Gaddafi knew that and was determined to turn the Libyan people’s desire to reclaim their country in a peaceful manner impossible. The Libyan people were oppressed and living under constant restrictions of free thought and free speech and those are the most dangerous of all subversions. Libyans lived in terror, oppression, and suppression under Gaddafi. The Revolution was in the minds and hearts of the people and the collapse of the regime was because its brutality and corruption. It was not made somewhere; it came because it was born from the past evil that engulfed Libya for 40 plus years. Was it worth it? Of course it was.

How do you see the near future of Libya?
Today, Libyans are living with chaos, lawlessness and most importantly terror. Of course, there is an ongoing mess everywhere. The country’s infrastructure is in complete ruin. Cities are unable to provide basic services. Garbage is everywhere, many roads are ruined and not maintained any more, government services are worse than before, internet is barely usable, inflation is dreadful, electricity cuts for days are the norm now. Worse, some government entities are being robbed and destroyed by different militias and their resources are taken across border. All that shouldn’t be surprising for a Post-Revolution country, especially a violent one. But the question is: with an inexperienced youth, a corrupt government, a terrible infrastructure; what’s the natural evolution/progress in this situation and what’s the very likely outcome? What happens after “widespread social chaos” is difficult to predict as it often depends on local conditions combined with regional and international considerations.
What should be done in your view?
There are often two requirements that a nation needs to fulfil after any internal disorder, those being economic sufficiency and a need to establish a system of just governance. In many cases, particularly after very violent confrontations, people trade the elements of the latter requirement for the former and promote the rule of a strong leader.
With that being said, I think the following should be done: Libyans should restore the monarchy in and call for Prince Mohammed El Senussi as the King to unite Libya again. This should be done with adopting the Libyan constitution of 1951 and a call to ratify it.  Educate people and the option of adopting a constitutional monarchy as the system of government that combines a monarch head of state with a parliamentary system.
Embrace a federal system that gives power to local government such as counties or regions to act as executive power to provide services to local populations. Local governments can elect officials, enact taxes, and do many other things that a national government would do, just on a smaller scale. Local government is consistently rated most favorably by citizens.
The above solutions can only be accomplished by supporting women and youth in leading a high-level conversation on peace and stability. It is also important to identify spoilers or stabilizers and empower women and youth again to provide support for the stabilizers and weaken the spoilers
Ayat Mneina, renowned member of Al-Shabab Libya, the Libyan youth movement 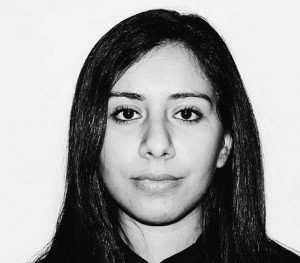 Dear Ayat, we first met in 2011, you are  a member of the influential Al Shabaab Libya movement ; the Libyan youth movement that played a crucial role in toppling Gaddafi 6 years ago. What do you think of the current Libya? Was it worth it?

As a young Libyan who engaged in toppling the regime six years ago, my hopes were for real change and a better future for Libyans. Today, Libya has not fulfilled the expectations that many had hope for.

Nonetheless, a dictator with a history of violence, corruption, and injustice that spanned over four decades and impacted the lives of several generations, is no longer in power. Libyans have to look deep within themselves if they are to reclaim their country and face the difficult task of putting it back together and building a Libya that is mindful of its history and committed to a future that is stronger for its unity and diversity.

How do you see the near future of Libya? What should be done in your view?

The near future of Libya will continue to see the struggles that have plagued it for the past few year, security will remain one of the foremost concerns as long as militias rule and weapons are the currency of power. A peaceful political solution cannot be reached without considering how to guarantee safety and security for all Libyans. Demilitarization efforts must take place.

Political players that have failed to seriously act to help the country move forward must stop stalling and know that the country has already put forth a mandate for what they’d like to see in Libya: all Libyans want guaranteed safety to live, to work, to pursue education, rights to basic personal freedoms. Libyans have already demonstrated immense resilience and talent, they merely need a country that reflects their best qualities.