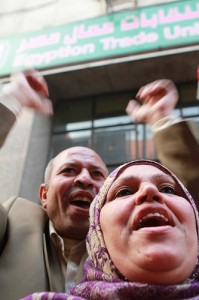 Karama founder and CEO Hibaaq Osman was featured in this February 26 article from IPS News:

Nora Rafeh Refa Tahtawi, a youth activist who participated in the Tahrir protests and is now in New York for the two- week Commission on the Status of Women at U.N. headquarters, recalled that women stood side by side with men, all sharing the feeling that they belonged to the same movement with the same goals.

The Egyptian people simply want “freedom, justice, dignity”, Kamel told IPS, and “this is the first time that women deal with dignity as equals with men.”

“There is no room for ethnic tension,” she added, highlighting the idea of “family” described by Tahtawi with the formula “one heart, one hand, one brain”.

“No one will manage to divide them [the Egyptian people] now,” Kamel said.

Read the full story at IPS

Photo courtesy of Sarah Carr under a Creative Commons License.