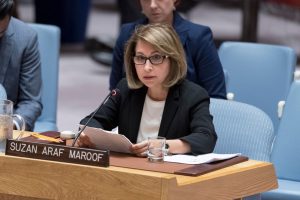 The UN Security Council heard evidence on the current situation for women in Iraq from civil society activist and head of the Cross-Sectorial Taskforce on UNSCR 1325, Suzan Aref.

Suzan told the Security Council about how three crises in Iraq are impacting women.

Currently, 8.2 million Iraqis require urgent assistance – most of these are women and girls, who lack access to basic rights and security. Despite women bearing the a disproportionate burden in this situation, 91% of camps for displaced persons in Iraq have no women in their management, which is a serious barrier to women’s needs being met.

Sexual and gender-based violence continues at alarming rates. Women and girls who have lived in areas controlled by ISIS have been exposed to the most extreme forms of violence. Acts such as kidnapping for sexual slavery and exploitation, rape, and forced marriages have been used as a way to subjugate the whole community.

Suzan noted that patriarchal culture in the community means that it is victims who are forced to bear social stigma and shame. They continue to be marginalised by their families and community on their return.

The collapse of the social security network has further impacted the social and economic status of women, making the face of poverty predominantly female.

“Security and safety of women are strongly linked to their participation in decision making.”

Women’s security and rights are tightly linked to their participation and role in decision making, Suzan discussed. In spite of a 25% quota in parliament and public institutions, women remain underrepresented or absent in decision making. This is the case in political parties, which generally lack an acceptance of the important role women have in decision making. Suzan said that this is due to the weight of tradition, the economic dependence of women on men, unequal division of family responsibilities, and the influence of extremism on society.

Suzan then discussed the work of the Cross-Sectoral Task Forcem which she heads. The taskforce started work in 2012, bringing together women’s civil society and 23 ministries – 15 from federal Iraq, 8 from Kurdistand, as well as legal experts, MPs. It was this task force  that developed the Iraqi national action plan for the implementation of UNSCR 1325.

The work between government and civil society has shown that women cannot be left aside, and they cannot be simply considered as victims. It shows that women’s needs should be addressed in a comprehensive manner and approach that the NAP has adopted.

Suzan told the Security Council that it needs to consider social protection in Iraq. This would mean:

The NAP is a massive step forward for Iraq, in the challenging context it requires stronger coordination and stronger commitment to women’s rights. It needs financial and technical assistance from UNAMI, the Security Council and the broader international community.

Suzan ended by saying that the task force looks for the Security Council to strengthen this work and coordination on women peace and security in Iraq.