For the first time, a Palestinian woman addresses the UN Security Council 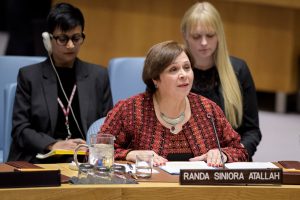 It is met over 8,000 times, but the UN Security Council had never heard from a Palestinian women – until today. Randa Siniora, head of the Women’s Center for Legal Aid and Counselling, told the Council today of the gendered impact that occupation has on the daily lives of Palestinian women.

Speaking in the open debate on the implementation of the women, peace and security agenda, Randa told the member states that though the council had passed UNSCR1325 unanimously, “the lives of Palestinian women are evidence that these commitments have not been met.”

Giving examples of Palestinian women whose lives have been touched by the violence of occupation, Randa noted that the one of the key consequences is the exacerbation of existing gender inequalities – “the occupation reinforces the patriarchal structures of Palestinian society.” Occupation has driven up domestic violence and femicide.

"In committing to Women, Peace and Security, the Security Council recognized the importance of women’s meaningful participation, and that without women, there can be no peace. The lives of Palestinian women are evidence that these commitments have not been met"#UNSC #UNSCR1325 pic.twitter.com/JWqQveMqZA

Though women have played a central role in the Palestinian liberation movement, violence freezes women out of public life, and women’s civil society and journalists have faced a crackdown on their ability to work, as well as assaults and detention.

Despite the clearly gendered nature of occupation, Randa said that Palestinian women continue to be marginlized in the processed that affect them, with women’s representation in Palestinian Authority institutions being barely 5 percent. This has left little opportunity for women’s perspectives and experiences to inform decision making.

To address the problems she outlined, Randa called on the Security Council to take the following actions:

Watch Randa’s statement as part of the debate below, or read her full statement here.