CSW63: In the United Nations, Moroccan Women’s Rights Activists draw a bleak picture of the status of Moroccan women 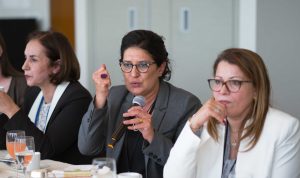 Women’s rights activists have painted a bleak picture of the status of Moroccan women during the 63rd session of the UN Commission on the Status of Women on “Economic Empowerment and Social Protection for Women and Girls”, held in New York.

Delegates have noted that despite positive achievements for economic empowerment and social protection of women and girls in Morocco, the gains “remain very fragile and limited and do not guarantee inclusion and cross-cutting success. The magnitude of the disparities and discrimination in these various fields is very significant given the requirements for equality and Morocco’s commitment in relation to the Millennium Development Goals.”

The warnings came in an event held by the Women’s Rights League Federation, the Moroccan Women’s Democratic Association, the Women’s Action Union, the Moroccan Association Fighting Violence Against Women, the Joussour Forum of Moroccan Women and the Moroccan Association for the Defense of Women’s Rights. The groups stressed that “persistent structural and social obstacles including patriarchy have prevented Moroccan women from reaching economic parity, both horizontally and vertically, or to reduce the large gender disparities, particularly in the area of ​​economic participation, which has been experiencing a serious decline in recent years, reaching 22 percent vs 70 percent, with a 14 percent unemployment rate for women compared to 8 percent for men.”

The groups also revealed “the persistence of the feminization of poverty and the employment of women in the informal and agricultural sectors in harsh conditions, low wages and sometimes without wages, not to mention the absence of compensation of domestic work, the absence of parental leave after birth, and the very weak rate of social and retirement beneficiaries”.

Participants stressed that the challenges in Morocco remain great, especially in the area of due diligence of the State towards the women victims of violence and its responsibility of accompanying, sheltering and empowering them socially, economically and humanely

They called on the Moroccan government to “issue the regulatory laws of the shelters and to provide them with the adequate human and material resources in the field of normative and concrete accompaniment, the women and girls victims thus alleviating the heavy burden from women’s associations, who are still the first ones to intervene in the field, and lack of resources is an omnipresent threat to the regular functioning of their centers.”