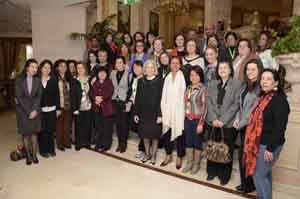 AMMAN — Arab women have played an active part in the changes sweeping the region in the Arab Spring transition, but they should ensure their place in the post-conflict rebuilding process, activists said on Monday.

“Women have been frontliners in the course of events witnessed in the region… the wall of fear is destroyed now and it is time for them to step up and seize the opportunity of the current transition,” Hibaaq Osman, founder and CEO of Karama Organisation, told The Jordan Times on Monday.

She made the remarks on the sidelines of the “Arab Regional Consultation on Gender Equality: Freedom, Tolerance and Solidarity: A Call from the Women in the Arab Region”.

“People are usually used to women complaining; in this event, women have something to say and solutions to offer for governments to implement,” Osman said, noting that the three-day event, which started on Sunday in Amman, is held in cooperation with UN Women.

Activists from nine countries, including conflict-ridden states, are discussing means to ensure equal representation of women in their countries’ constitutions.

Arab Spring countries such as Tunisia and Libya are still in the process of writing new constitutions after popular revolutions toppled autocratic rulers.

“In terms of violence, we are working to form a mechanism to combat it through a comprehensive approach — prevention, protection and participation,” Osman noted, expressing “shock” that violence against women is on the rise in some Arab Spring countries.
“The meetings will produce a document that will be presented to the UN and referred to governments to apply the recommendations at a national level,” she said.

Haifa Abu Ghazaleh, Jordan’s representative and executive member of the Arab Women Organisation, stressed the importance of the gathering for two main reasons: the UN discussions on the Post-2015 Development Agenda and the upcoming session of the Commission on the Status of Women.

“Women leaders will have a chance to highlight their countries’ challenges and achievements, particularly during the Arab Spring… they will air their concerns on whether women are returning to square one in terms of their rights,” she told The Jordan Times.

The current consultation is also significant in light of the high-level review of the MDG task force, which will take place in 2015.

“The MDGs lacked some issues pertaining to gender, human rights and peace…Jordan will be among the countries that will present its reviews of the goals and Karama came just in time to provide us with in-depth insights into the needs of women in the region”, Abu Ghazaleh said.

Zahra Langhi, co-founder of the Libyan Women’s Platform for Peace, highlighted her country’s experience in the post-Muammar Qadhafi transition.

She noted that Libyan women have started lobbying for their rights, embarking on several initiatives to call for an inclusive transition.

“You would not have seen these kinds of initiatives during Qadhafi’s era… women had withdrawn from public life under his rule,” she said.

Established in 2005 and headquartered in Cairo, Karama seeks to provide a framework for coordination, cooperation and linkage among people working to stop violence against women.

The original article appeared in the Jordan Times.