Damascus, Syria – More than sixty Syrian women from a number of Syrian districts and governorates met in Damascus on January 6th and issued the Syrian Women’s Charter outlining their shared vision for Syrian women, for the future Syrian state, and for peace. The meeting was a collaboration between the Syrian Women’s Forum for Peace, a partner of Karama, and a group of independent Syrian women representing all spectrums of Syrian society to discuss the role of women in peacemaking and identify priorities for Syrian women ahead of the Geneva II Conference.

“This meeting is very important as a first step towards reaching consensus among Syrian women from different walks of life towards creating a roadmap for peace building and women’s participation,” said Diana Jabbour, coordinator for the coalition of independent Syrian women.

The Syrian Women’s Charter, which was written jointly by participants of the meeting, discusses the path forward for peace and reconciliation in Syria. It advocates for women’s equal role and active participation in peace and transition processes, dialogues, and committees. It also sets forth a roadmap for international support, stressing the importance of engagement of men and women from inside Syria at Geneva II, while warning against over-involvement of international stakeholders in national affairs.

“We reject any international intervention in issues relating to the form of the state and constitution. Such issues are the responsibility of the Syrian people,” the document states. 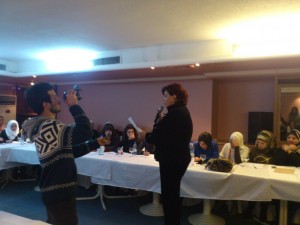 Participants at the January 6th conference acknowledged the crucial importance of achieving peace as a prerequisite to accomplishing long-term goals with regard to rebuilding the Syrian state and writing a new constitution. The Geneva II conference is seen as a tool to reach a viable peace agreement, but the group warns that without real representatives from Syrian society, the negotiations will fail to address the needs of Syrian people and will not have lasting impact.

“The work of international women’s organizations such as the International Women’s League, I-CAN, Donor Direct Action, V-Day, Hivos, and UN Women has brought Syrian women’s role and participation in peace and transition processes to the forefront. Karama has been working with women inside of Syria on this cause since the launch of the Syrian Women’s Forum for Peace in 2011,” said Karama founder Hibaaq Osman. “I’m proud of Syrian women for coming together and putting aside their differences to write this charter and illuminate Syrian women’s priorities. We hope some of this language will end up at the peace negotiation table.”

“Women are a great power and should be used for the interest of the Syrian people and not for any other agendas,” said Nawal Yazaji of the Syrian Women’s League. 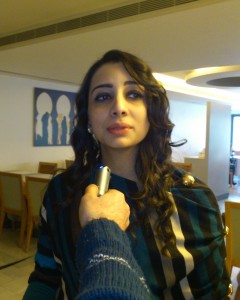 Prior to the conference, the Syrian Women’s Forum for Peace organized three workshops in Sweida, Hasakah, and Lattakia and distributed a questionnaire on Syrian women’s priorities for the Geneva II Conference to more than 6,000 women in all parts of Syria.

The “Syrian Women Forum for Peace” is a Syrian non-governmental organization, based in Damascus with a wide network of women and activists across the country.  The Forum aims at empowering women to play an effective and constructive role in peace building process and empowering women to be a key player and form a critical mass in the political life.  The Syrian Women Forum for Peace focuses on four thematic areas: Communication, Networking, Training, and Empowerment of local communities.