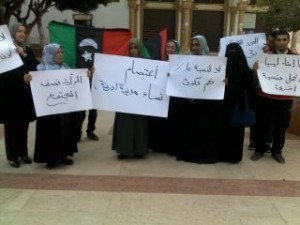 The Libyan Women’s Platform for Peace, along with a coalition of other civil society groups, call on all Libyans to reject the recently-issued draft electoral law, which promises only a 10 percent quota for women in the key legislative body that will create a new Libyan constitution.

To voice our strong objection, the Libyan Women’s Platform for Peace is issuing this call to protest and reject the draft election law, and demand a quota of 40%, and no in circumstances less than 30%, for women in the new parliamentary body.

Such a step would be a rejection of women’s great struggle and sacrifice during the February 17 revolution, and of their current demand for full participation alongside their brothers in building a new, peaceful Libya.

Mustafa Abdul Jalil, leader of Libya’s National Transitional
Council, praised the discourse around the draft law as a move towards a
more transparent Libya, and said “”Everything is open for discussion, ”
according to the Wall Street Journal.

“The electoral law mindset is basically exclusionist, said Zahra’ Langhi of the LWPP. “It runs against the spirit of the 17th Feb revolution in which women and men fought together to foster equality, justice and democracy. I am afraid that such an exclusionist mindset would replicate tribal and patriarchal structures which in turn would disempower women. Democracy entitles that all voices are represented, those of the majority as well as those of the minority. As long as there is discrimination in society that is gender based, a legislation has to be made to protect the disenfranchised, in this case it’s women.”

The schedule for protests in various Libyan cities is as follows:

UN Security Council Resolution 1325 affirms the vitally ” important role of women in the prevention and resolution of conflicts and in peace-building” and stresses the “importance of their equal participation and full involvement in all efforts for the maintenance and promotion of peace and security, and the need to increase their role in decision-making with regard to conflict prevention and resolution.”

To that end, the full representation of women at all levels of the decision-making process is crucial to ensure that Libya’s post-conflict transition proceed smoothly and reflect the desires, ambitions, and sacrifices of all elements of Libyan society.

Furthermore, Libya is a signatory to the Convention on Ending All Forms of Discrimination against Women (CEDAW) treaty, which states in Article 7, Section 2, requires signatories to take all appropriate measures to end discrimination with regards to women being able “to participate in the formulation of government policy and the implementation thereof and to hold public office and perform all public functions at all levels of government.”

Taken together, it is clear that women’s full participation in Libya’s constitution-drafting parliament is not simply smart policy; it is a vital step to comply with international treaties it has signed and bodies it is a member of.

We call on all Libyans, men and women, to join us in demanding women’s full participation in Libya’s political life.