Final Statement of the Fourth Think Tank for Arab Women 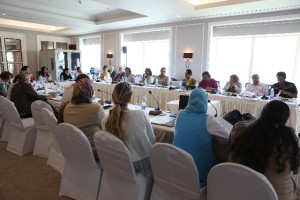 The meeting prioritized discussion on the role of women in the Arab spring and its impact on the region in order to exchange regional and international experiences and lessons; foster coordination and cooperation; and develop strategic approaches to strengthening women’s political participation, as voters and as candidates, and to promoting women’s role in transitional governments and societies as peacemakers, decision-makers, and leaders.

During the session, held at the Kempinski Nile hotel, participants examined the main challenges and opportunities to women’s equal participation in elections, including political instability, social gaps, gender stereotypes, gender-based inequalities in access and opportunity at the political level, and availability of support mechanisms and resources. With a view to informing and shaping the views of emerging female political leaders, this session focused on the role of women in ongoing revolutions and how they can sustain their strategic participation and influence in shaping the post-revolutionary climate.

Recommendations resulting from the meeting are summarized over four major topic areas: elections, media, coalition building, and a common cause.

Elections. Participants identified and discussed the challenges of gender Issues within formal political frameworks including: (1) the lack of political awareness among large numbers of women voters and the need for voter education throughout the electorate; (2) unclear electoral procedures and the importance of uniformity in implementing the law, and (3) the need for gender disaggregated data (i.e., electoral data indicating the number of women who register to vote, serve as candidates and vote) to ensure that women are full participants in the political process.

Additionally, speakers introduced dialogues on the importance of women candidates and political parties to listen to voters and conduct meaningful exchanges in order to be accountable to their constituencies. In order to keep candidates accountable once elected, they must clearly and meaningfully: respond to voter’s needs, as well as other

issues including human and women’s rights and social development priorities; and integrate their constituencies in developing their political vision and agenda.

Media. Think tank participants expressed concern with the media on several fronts: (1) media outlets do not provide equal opportunities for air time to women candidates as those provided to men, (2) women are infrequently invited to provide expert analysis on political and social developments. The media must work with political parties, candidates and NGOs to take responsibility for helping to educate voters on the electoral process and focus on substantive issues of importance to all voters. Women’s networks must be prepared to provide clear and timely information to media, and media must take advantage of the expertise in women’s networks.

Coalition-building. Participants recognized that women cannot be successful in political life unless they form strong coalitions among like-minded groups, other social movements, political parties, unions, etc. and work together to advocate with decision- makers for common causes. The participants discussed the value of intergenerational dialog as a way of appreciating the experiences of all other groups and stakeholders.

A Common Cause. Participants recognize that the world is interconnected and that women and men must collaborate and advocate at regional and international levels to ensure peace and prosperity. Participants considered the complexity of ethnic, national, social and gender identities and opportunities for transcending borders.

The fourth session of TTfAW featured speeches from Ambassador Charlotta Sparre, Her Excellency Dr. Mervat Tallawy, Ambassador Mälin Karre, Dr. Fatemah Khafagy, and other academics and diplomats from the Arab world and Europe, and was cosponsored by Karama and the Swedish Institute in Alexandria.